Known for its rows of beautiful Victorian homes, excellent shopping and rich history, the Back Bay has some of Boston’s most sought after real estate. The area is home to several popular cultural hubs, including Copley Square, The Prudential Center, Boylston Street, and of course, Newbury Street. 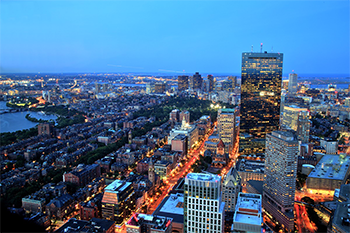 Newbury Street is a particularly popular destination for both residents and visitors, because of its fantastic boutiques and local restaurants. If you find yourself on Newbury Street, stop in and say hello to our team here at The Charles Realty. We’d love to meet you!

The Back Bay is perfect for residents who want to be in the heart of the city, but also desire access to outdoor areas for activities like jogging and dog-walking. The two major parks in the Back Bay are The Charles River Esplanade, which runs along the water on the north edge, and the lovely Commonwealth Avenue Mall, which bisects the neighborhood. The Boston Public Garden and the Boston Common are also just a short walk away, bordering the Back Bay to the east. 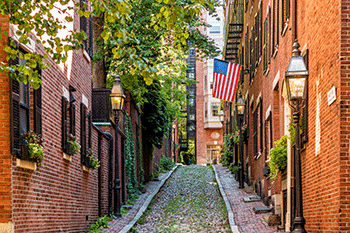 The home of the Massachusetts State House, which was built in 1798, Beacon Hill has been one of the most cherished neighborhoods in Boston for centuries. The intimate cobblestone streets and Federal-style rowhouses of Beacon Hill are a timeless reminder of the area’s great history.

Beacon Hill borders the Boston Common and Boston Public Garden to the south and the Charles River to the west. The campus of Suffolk University lies in the eastern-most section of this neighborhood. Massachusetts General Hospital and the Charles River Shopping Center are just across Cambridge Street to the north of Beacon Hill, and the iconic Faneuil Hall Marketplace lies a short walk to the east. This neighborhood has three sections: The South Slope, the North Slope and the Flat of the Hill (should south slope and north slope be capitalized as they are names?

While Fenway-Kenmore is most well-known as the setting of Fenway Park (home of the Boston Red Sox), this area also has many great restaurants, bars and music venues. The recent years have added many new additions to the neighborhood, including a variety of luxury rental buildings, The Landmark Center, a cinema, and new and improved Kenmore Square T Station. 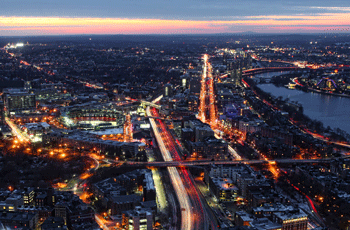 This is an amazing place to live year-round, but spring and summer are definitely the most exciting time in Fenway-Kenmore because of the neighborhood’s passionate connection with the Red Sox. If the Sox are able to make a playoff run, there is no better place to be in September and October as well. Fenway Park also hosts events like concerts, hockey games and even freestyle skiing competitions. The House of Blues is another popular music venue in the Fenway/Kenmore area; it is located just steps from the stadium on Lansdowne Street.

Other area landmarks include, the Museum of Fine Arts, Symphony Hall, and the Isabella Stewart Gardner Museum. The Longwood Medical Area, comprised of the Beth Israel and Brigham and Women’s Hospitals lie along Fenway’s outskirts.

Many colleges and universities reside in the Fenway-Kenmore area including Wheelock, Boston University, Simmons College, and Mass College or Art. Also, check out the Fens if you like to stay active and spend time outdoors. This beautiful, expansive park is one of Boston’s most cherished places. 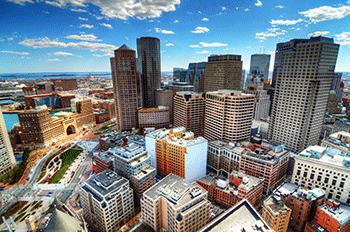 The Midtown neighborhood of Boston includes the Financial District, Downtown Crossing, Government Center and the Theatre District. This area is perfect for those who work in downtown Boston and don’t want to have to deal with the hassle of a long commute.

Because of its centralized location, Midtown offers easy access to some of Boston’s most coveted restaurants, parks, and cultural hubs. The Boston Common and Boston Public Garden are located next to Downtown Crossing and the Theatre District. Quincy Market, Faneuil Hall Marketplace and The New England Aquarium are only a short walk away.

Millennium Place and the Millennium Tower- due for completion in 2017- introduced two new high rise full-service buildings into the neighborhood. With over 350 new condos experiencing record breaking sales, this area is in high demand and will continue to experience development and growth over the next decade. 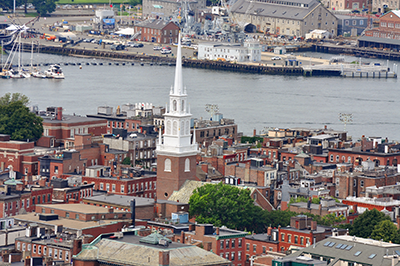 The North End is Boston’s oldest, and perhaps most well-known neighborhood because of its vibrant culture. While this area is home to a diverse population, it is most commonly associated with the distinct Italian-American presence because of the dozens of great bakeries, restaurants and markets that line its narrow streets.

With several beautiful waterfront parks, including Langone Park, Prince Street Park and Christopher Columbus Waterfront Park, there are plenty of great places for outdoor recreation. There are also several important historical landmarks in the North End, such as the Old North Church, the Paul Revere House, and the Freedom Trail which runs through this neighborhood, as well as several others.

The TD Garden, Boston Aquarium and Faneuil Hall Marketplace are all easily within walking distance of the North End. 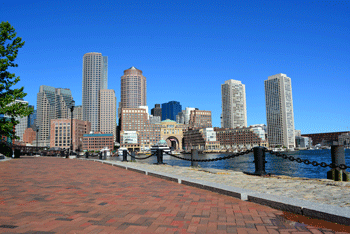 The Seaport District is the northeastern section of South Boston along the Boston Harbor. This area has undergone significant development over the last decade and is now one of the most modern and exciting sections of Boston. The real estate in the Seaport consists primarily of luxury condo and apartment buildings with several new construction condo projects preparing for upcoming occupancy.   The newly developed Fan Pier, Pier 4 and Seaport Square will be joining Liberty Wharf in the neighborhood over the next few years.

There are now over 55 restaurants and bars in the area, including the Lawn on D – a innovative outdoor interactive space that is very popular during the summer. The Seaport District also contains the Boston Convention Center, the Blue Hills Bank Pavilion, the Institute of Contemporary Art, and Harpoon Brewery.

The wide, multi-lane streets, as well as the several MBTA stops in the area, make it easily accessible for those traveling to this neighborhood. 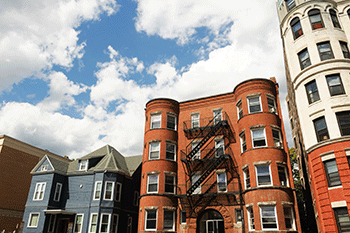 South Boston (or “Southie”) is one of the oldest neighborhoods in the United States and has recently become very popular among young professionals. This neighborhood has a wide range of apartments and homes to choose from, including many new luxury condos.

While South Boston is known for its prominent Irish-Catholic culture, over the last few decades it has become home to people from many ethnic backgrounds which has added to its strength as a community.

Many people who live in South Boston rely on the MBTA subway system to commute to work or school in Boston. There are several MBTA stations in this neighborhood, including Andrew Square and Broadway along the Red Line, and the new World Trade Center Station along the Silver Line.

For those who like to stay active, the Head Island Causeway and Castle Island Park are great places to walk dogs, jog or ride bikes.

The main road running east to west through Southie is Broadway.  This street has undergone major improvements over the last 5 years bringing a new T-Station and welcoming over a dozen new restaurants and bars of all genres to the neighborhood. 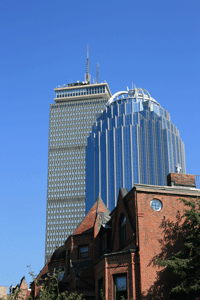 As Boston’s largest neighborhood, the South End is home to many of the city’s most popular restaurants, bars, museums and artistic venues. There are many small parks and recreational areas placed among the beautiful Victorian buildings and brick rowhouses.

Residents of the South End come from a wide-range of ethnic backgrounds which contribute to the sense of cultural appreciation present in this area. Tremont Street, in particular, offers a diverse collection of restaurants, including Brazilian, French, Ethiopian, Indian, Italian, Thai and Japanese establishments.

Ask Us A Question: